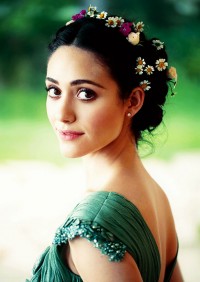 You know when you get invited to a dinner party, where you will know very few people, and wonder who you will be seated next to? You are as excited as you are nervous, because it could go either way. Someone super cool, or someone….well, not so much. Let your fears be gone when you find yourself seated next to Emmy Rossum, (who recently stunned at this year’s MET ball). I recently went to the Elle Magazine Women in Television dinner, as a guest of my dear friend, Joe Zee (new executive creative director at Yahoo! Yay, Joe!) But I know what happens at events like these — Joe is busy, he is Joe Zee, afterall, and being pulled in many directions. So I crossed my fingers and hoped that while he was charming the room, that seated on the other side of me would be someone nice. Someone cool. Hell, just give me someone who actually eats. Cue Emmy. Beautiful & polished, yes, but also the girl who orders the steak, (not the fish), and chows down on truffle frites while wearing a beautiful dress by J. Mendel. I should have known she could have a foot in both, having channeled the elegance of Christine in Phantom of the Opera, to currently dominating as the gritty Fiona, on Showtime’s hit series Shameless. And lest we forget, this NY native was named one of People Magazine’s 50 Most Beautiful People, presumably for all the reasons I adored her at this dinner. She’s a stunner, and she keeps it real. My kind of girl.