It wasn’t until filming the pilot for Suits that I began to know NY. And it wasn’t until a good year after that, that I began to know NY well. I found my nook. My downtown: a little grubby, a little rough around the edges, a lot stylish, and as cool as I aspired to be – we’re talking the Lower East Side. I love a neighborhood that you can get lost in, always finding new nooks and crannies, interest and intrigue. And while the West Village is high on my list, and nothing is more convenient for work than staying uptown, this neck of the woods deserves a post all its own. And trust me when I say, editing this down to our favs was a task in and of itself. Bon voyage, friend! 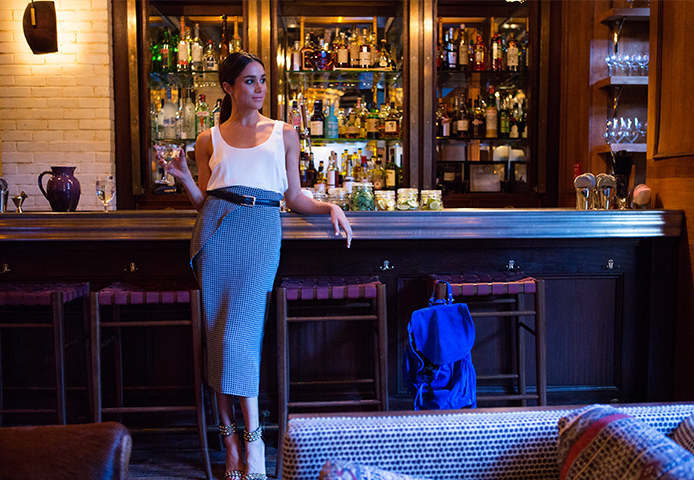 The Ludlow – When my dear friend, Markus (you know the one), intro’d me to Johnny Christ to check out the new property he had his hands in, I was tickled pink to try it out (after all, Johnny had been the main man at The Bowery Hotel, followed by The Nomad, and then West Village gem, The Marlton) – the man has taste. The Ludlow was generous in allowing us to use the space for a Tig photo shoot, both in the perfectly styled rooms, the welcoming lounge, and breathtaking rooftop. It really is a LES treasure which I can’t wait to call home next time I’m in the city. 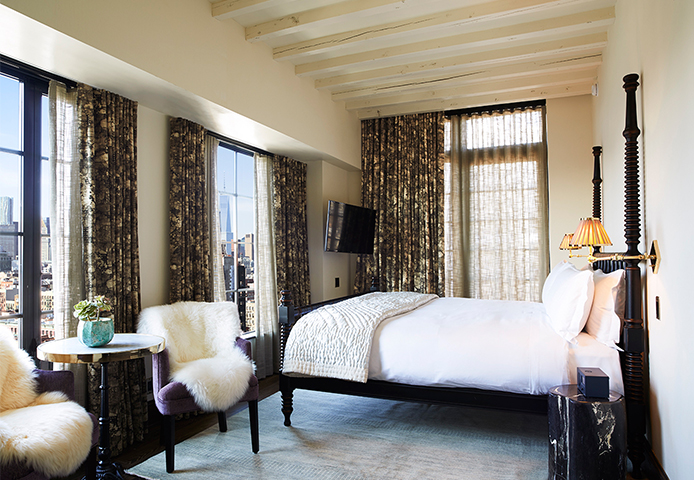 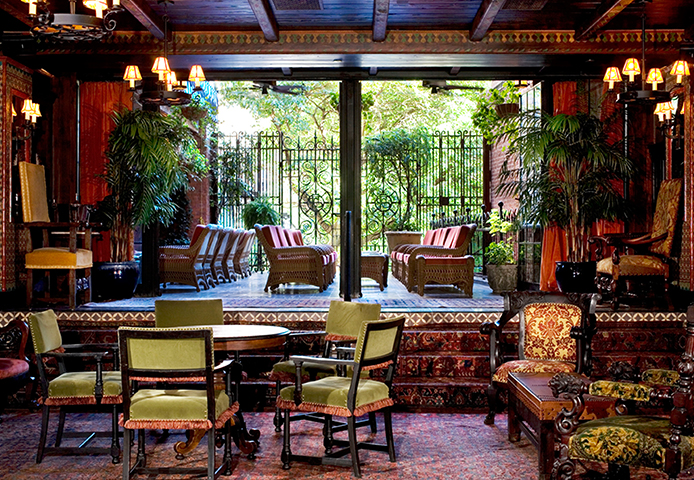 The Bowery Hotel – An old standy, known for it’s cozy charm, who’s who nightlife scene (let’s not discuss the nights I’ve had on that back patio with everyone from my Suits castmates, to Jess Stam, Dianna Agron, and the countless celebs you end up clinking glasses with). And yet with all of that star power, it remains one of the most down to earth properties you could dream of – friendly staff, soaking tubs that wash away any bad day, and also small balconies from the baby suites that make it feel like your own LES sanctuary. Ask for Gigi. She’s my favorite. 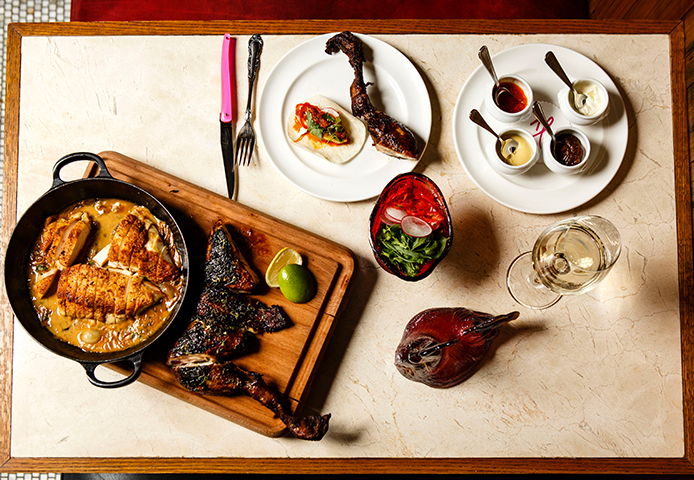 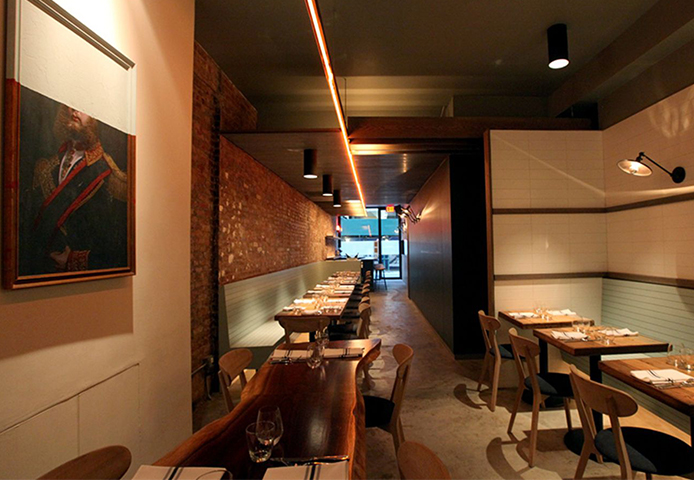 Dirty French – Since opening on the ground floor of The Ludlow this fall, Dirty French has been booked solid with reservations—and for good reason. It’s not the only classic, #throwback French restaurant that’s opened around the city recently, but it is one of the best (and considering it’s brought to you by Mario Carbone and Rich Torrisi—the same team behind the much lauded Torrisi Italian Specialties, it’s not exactly a surprise). They’re not messing around with the food here because with plates like duck a la orange and cote de bouef for deux, you don’t come here if you’re just looking for a nosh.

Contra – It’s difficult to describe the food at Contra (they like to call it “contemporary New York cuisine”), but we can say this: whatever they’re serving today on their seasonal, locally-sourced 5-course tasting menu is delicious and like nothing you’ve ever had before. They use a ton of vegetables that tend to not get a lot of love on other menus (like kohlrabi) and combine flavors in unique ways that will certainly pique your tastebuds. Plus, at $55 for a tasting menu, you’re not going to get a better deal in the city if you tried. 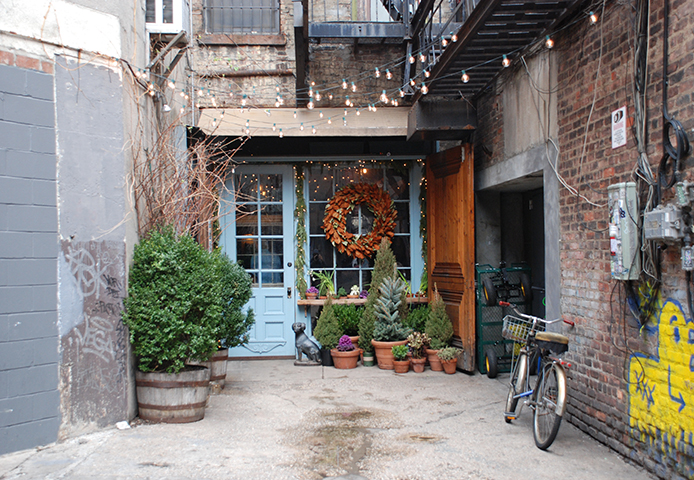 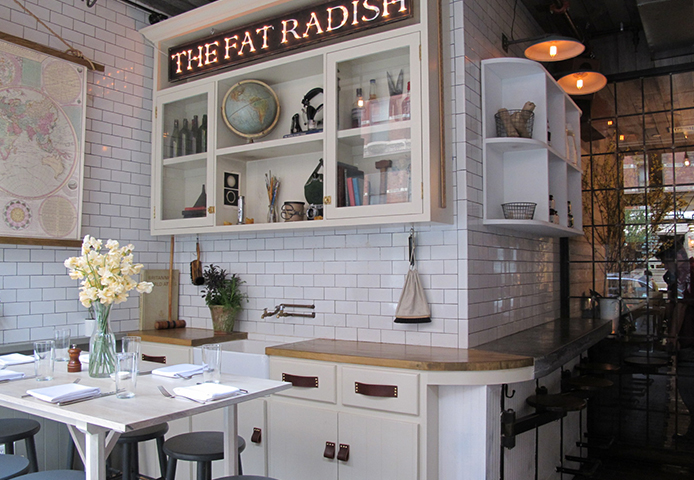 Freemans – Hidden in the back of an easy-to-miss alleyway, Freemans has that hipster vibe that shows itself not only in the flannel clad crowd that heads there for brunch, but in its cool, eclectic decor. The food is great and the place is one of the coolest in the city, but note that they don’t take reservations, so bring your phone to flip through your Instagram feed while you wait.

The Fat Radish – A delightful and delicious British (yes, British!) restaurant, The Fat Radish may have one of the greatest restaurant names of all times, but that’s not why we keep going back to this beloved spot (okay, not the only reason). On top of its delectable, locally-sourced cuisine (featuring sharable plates like Montauk diver scallops and peeky toe crab gratin), The Fat Radish just has a happy, bright vibe that we simply love.

Clinton Street Baking Company – Hands down the most-loved, most-talked about, and most crowded bakery and brunch in all of NYC—and that’s really saying something. New Yorkers from every side of town flock to CSBC for their fluffy blueberry and banana-walnut pancakes and brioche french toast. But the real secret is that the restaurant serves their menu all day, including dinner, so if you ever have a hankering for breakfast at 9pm, you know where to go. 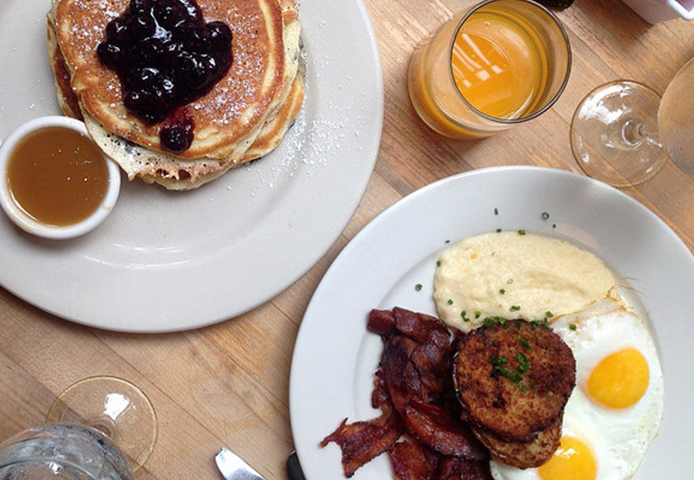 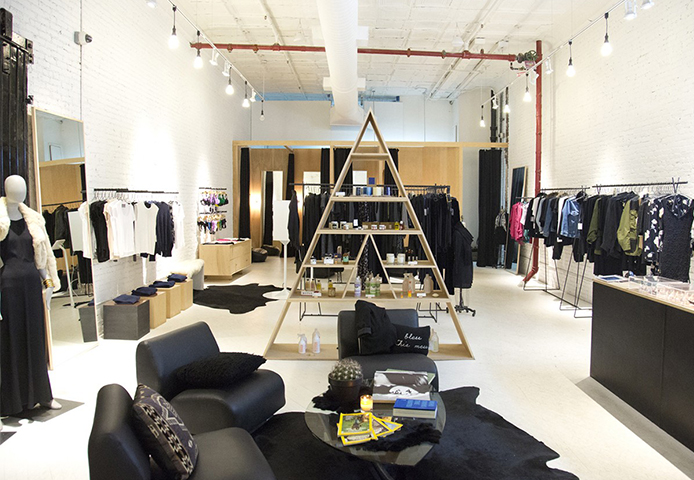 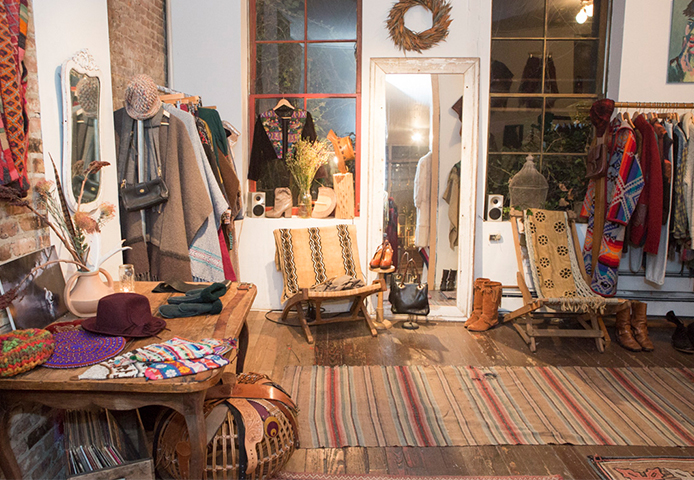 Reformation – A brand that’s cute and eco-conscious—now that’s what we’re talking about. Reformation may be LA-based, but it fits right in to the Lower East Side, where doing things that are good for the earth while still remaining chic gives the area its mojo.

Frankie Shop – What was once the cult e-comm site Pixie Market’s brick-and-mortar is now the concept shop Frankie—a much more grown-up version of the original boutique. Head here for creative work wear (like tuxedo dresses and oversized turtlenecks) at prices that you’ll scoff at—for how low they are for the quality the goods are.

Narnia Vintage – Vintage shops are like Starbucks on the Lower East Side—they’re literally everywhere, but Narnia Vintage is one that stands out. It may be a teeny tiny storefront, but its offerings are selected so perfectly that you won’t even need to rummage around through tons and tons clothing. Narnia is known to be the fav of vintage pros around the world, so you know that it’s definitely at the top of its class. 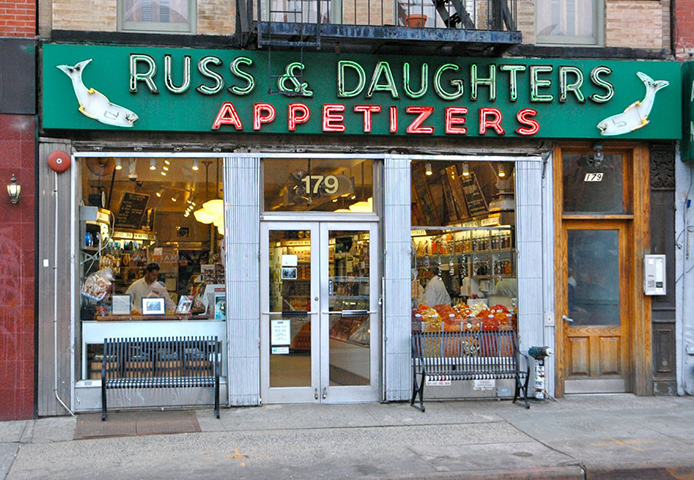 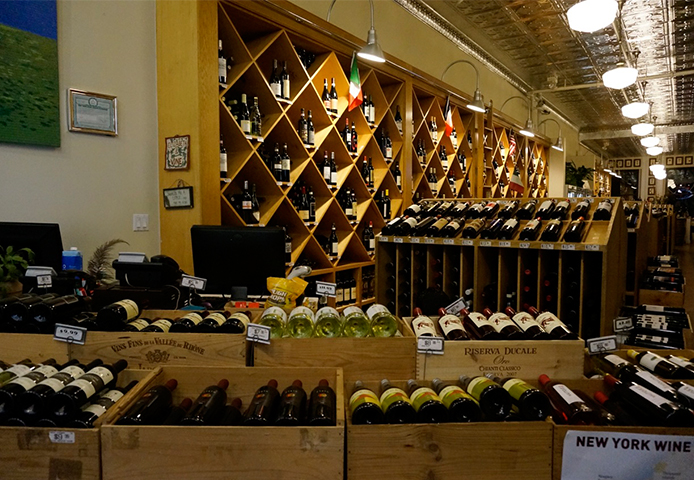 Russ and Daughters – Historically, The Lower East Side housed mostly Jewish immigrants from Eastern Europe, and you can still get a taste of that (literally) today. And in a city filled with a deli on every corner, Russ & Daughters is where you should be getting your lox for all those bagels and schmear you plan on eating later. The food shop celebrated its 100th anniversary last year (which they celebrated by opening up a cafe around the corner), so you know they’re at least doing something right (and that something is smoked fish.) Seriously—run, don’t walk over there.

Bowery and Vine – Rather than raiding your mini bar for a $50 half bottle of mediocre wine, hit up this local wine shop that carries wines from nearly every region you could possibly think of. And their liquor offerings are notable as well, particularly with their whiskey selection. Plus, the staff is incredibly helpful and knowledgable, so holler at them if you need any help or if you just want to chat about booze. 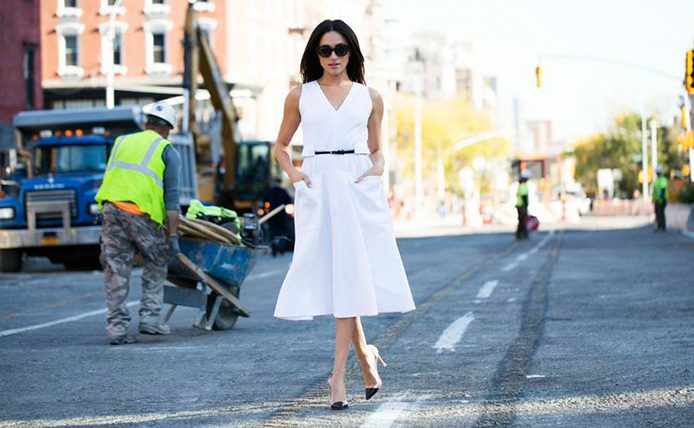 Yoga High – Even though the Lower East Side isn’t as hectic as, say, Midtown, it’s still tough to find peace and quiet in a city like New York. So slow down, take a breather, and take a class at Yoga High. It’s crucial to slow it down for a quick hour or so while you’re in NYC, so finding a great yoga spot is critical, and Yoga High is the absolute best in the Lower East Side.

The Tenement Museum – Hands down—this is the coolest museum in New York City. And considering all the wonderful museums in New York, that’s saying quite a lot. But you’re not going to get the same experience that you do at The Met or The Guggenheim—The Tenement Museum is a hands-on experience. You’ll be taken on one of their many tours—either a walking tour of the neighborhood (including their legendary food tour) or a tour of an actual tenement. The Lower East Side is filled with so much history, and The Tenement Museum gives you a look at what it would be like to have been an immigrant in the turn of the century. This is something that you won’t want to miss—so make sure you sign up in advance on their website. 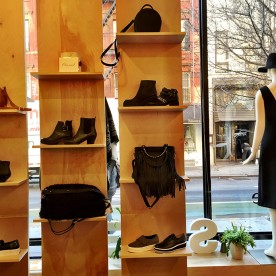 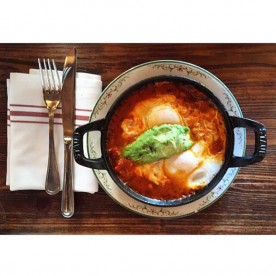 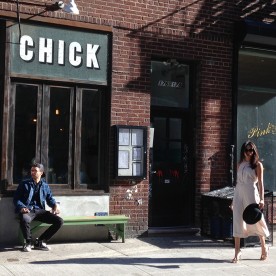 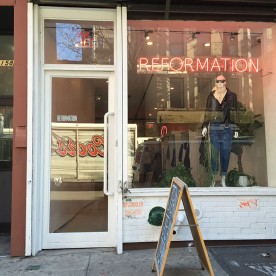 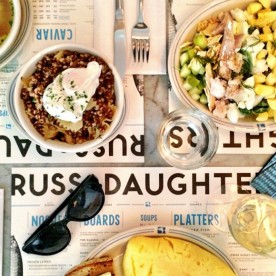 My downtown: a little grubby, a little rough around the edges, a lot stylish, and as cool as I aspired to be – we’re talking the Lower East Side.