They say everything is bigger in Texas—and for good reason. Dallas, in particular, is a sprawling, massive city filled with people with big hair and big personalities. But behind the city’s old school veneer lies a bustling metropolis that boasts some of the country’s top-rated restaurants, one-of-a-kind shopping experiences, and contemporary art collections that rival the best in the world. That doesn’t mean that Dallas has lost any of its Southern Charm—it’s chock full of it. You’ll feel right at home in a pair of vintage cowboy boots and a drawl laced a plethora of “y’alls.” So go big, or go home, because you’re in Texas, baby.

Knife– Celebrity Chef (and former Top Chef contestant) John Tesar excels at his brand new meat-centric restaurant. And while you’re going to find steak on nearly every single menu in Dallas, Knife’s are literally a cut above the rest. All of the meats at this modern steakhouse are dry aged in-house (a technique Chef Tesar learned from friend Mario Batali), and everything tastes…well, magical. If you’re still not convinced that the food is anything less than spectacular, his blood sausage topped with uni and the 240-day dry aged Niman Ranch rib eye will make you a believer. Oh, and don’t forget the french fries with the side of spellbinding salsa verde.

The Porch– Located in one of the city’s coolest, up-and-coming neighborhoods, Uptown Dallas, The Porch features Southern fare set among a vibrant bar scene. Feast on a mash-up of classic and contemporary cuisine, like the buttermilk fried chicken cobb and their un-missable house smoked brisket enchiladas. 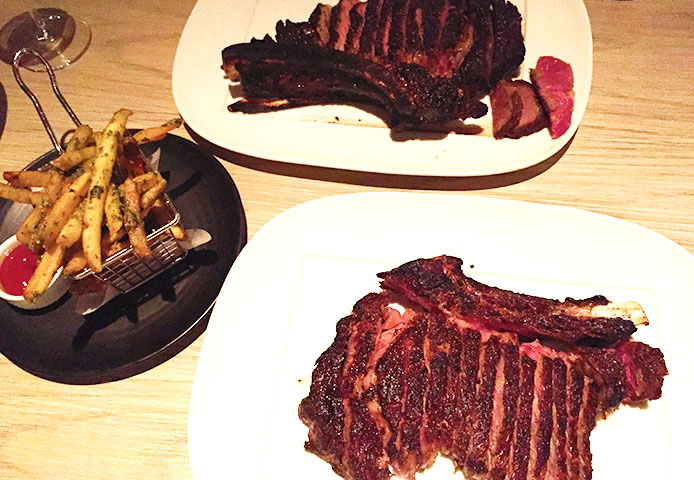 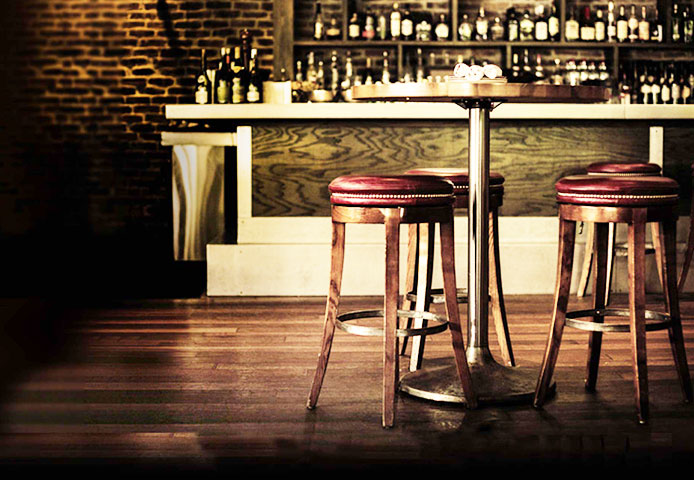 Mi Cocina– Ask anyone in-the-know in Texas for a restaurant recommendation, and Mi Cocina will be high on their list. Don’t be surprised if you’re caught waiting for a table at the upscale Tex-Mex chain—the margaritas are just that good. We recommend their location in the Highland Park Village so you can hit up the less-known third floor Monkey Bar when you’re done with your din.

The Dram– There’s no shortage of bars to hop while you’re visiting Dallas, but skip the ubiquitous sports bar in favor of a lounge like The Dram. Drink any one of their signature cocktails while taking in the gorgeous, vintage-esque interior. And if you’re too tired to dance, you can take a seat on one of their plush velvet couches to rest your high-heeled feet. 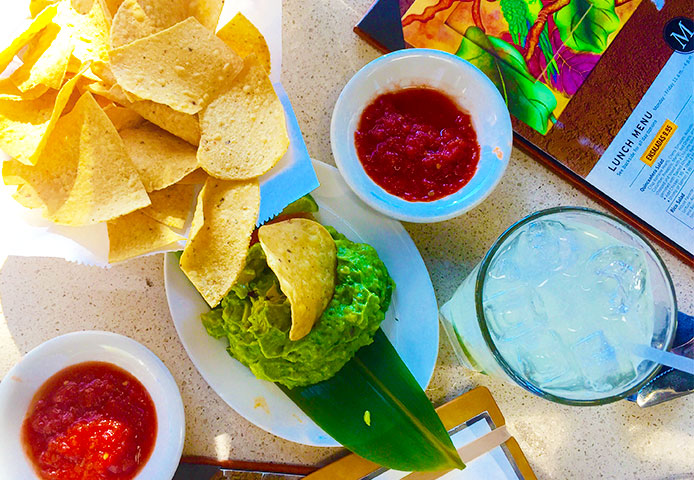 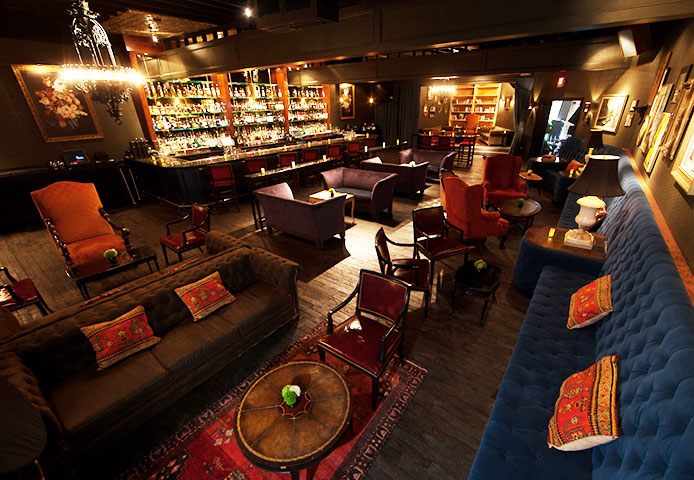 The Joule Downtown– Definitely crowned the swankiest spot to stay in town, The Joule not only is Dallas’ sexiest (and one of its newest) hotels, but it’s got much more than just a bed for you to crash on. The building itself was renovated from a historic landmark from the 1920s, and the contemporary decor is infused with art deco. The hotel features Dallas’ top rated spa, ESPA, a rooftop pool, and some of the best shopping on its ground floors (TENOVERSIX and the Taschen Library are not to be missed). Oh, and the hotel’s downtown Dallas location might be the best in the entire city—and it’s situated right next to the original Neiman Marcus. 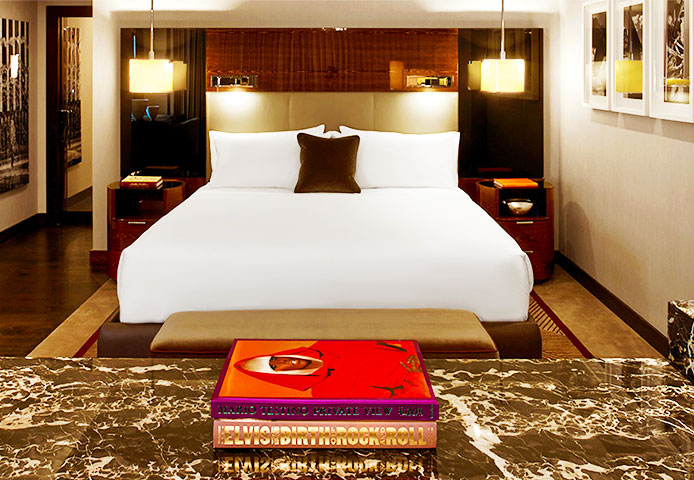 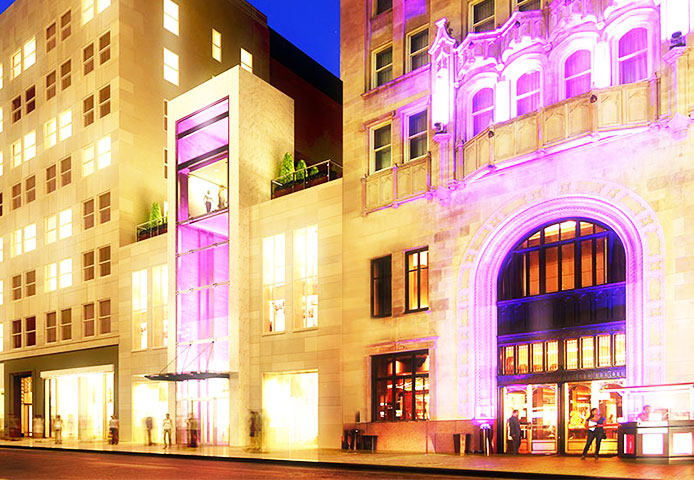 The Crescent– One of the most luxurious hotels in all of the South, The Rosewood Crescent, with its incredible marble exterior, just radiates opulence and grandeur. It’s the place to stay if you want that real Souther hospitality and old-world charm. The gorgeous hotel was built 25 years ago in Uptown Dallas, and its been heralded as the anchor to the now booming area. (Plus, the hotel has a Nobu. You can’t get much better than that). 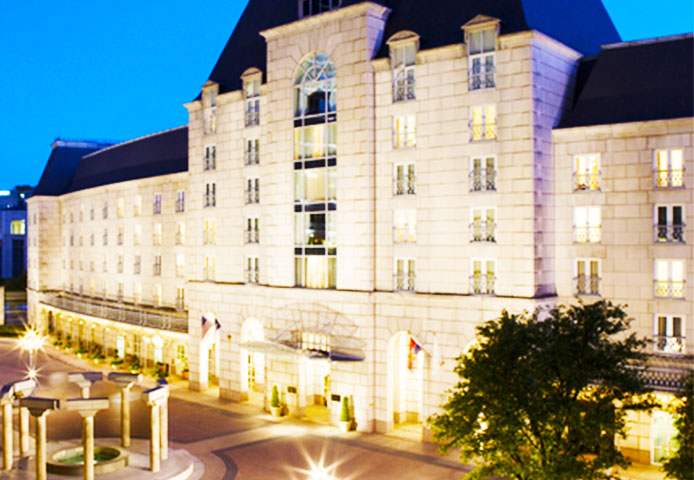 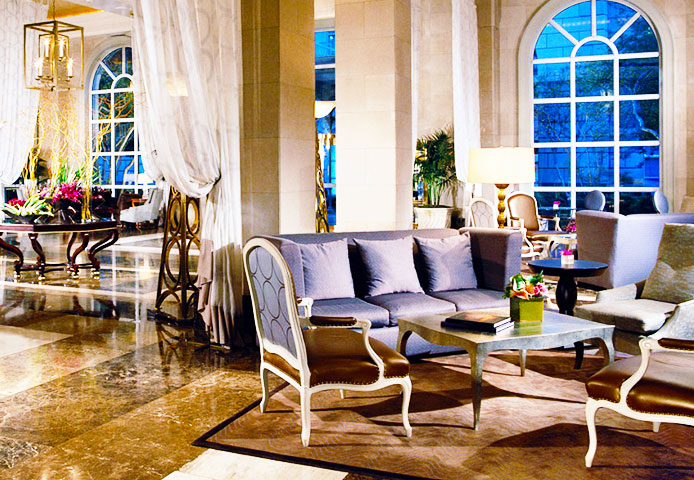 The Highland Park Village– There’s a reason why Gwyneth Paltrow chose this as the location for her most recent Goop pop-up shop—the Highland Park Village is the place to be seen in Dallas. The gorgeous outdoor shopping center features all the luxury stores you could possibly ever want to window shop at—but that’s not the real reason to hit up HP Village (although I wouldn’t turn down an Hermes scarf or Balenciaga tote if any one is willing). The smaller boutiques set among the behemoths (like Chanel, Saint Laurent, and Harry Winston) are definitely worth taking a peek into. Five and Ten is the little sibling of Dallas’ most famous boutique, Forty Five Ten, and offers adorable (and designer) tchotkes as well as uber-hip brands like Band of Outsiders and Proenza Schouler. Duck into Avant Garden to see some of the most gorgeous flower arrangements and then wind your way to Molto Formaggio Cheese Shop which sells one of the biggest arrays of cheeses I have ever laid my eyes on. And if you’re lucky enough to head to the village during the holidays, you’ll see some of the most spectacular Christmas lights possibly ever.

Double R– One of the must-packs to Dallas is a crisp button-down—but in case you missed the memo, head to Double R by Ravi Ratan to get your very own made-to-measure custom shirt in a number of different fabrics, colors, and patterns. And if you really want the Southern experience, make sure to monogram your duds (like I did). 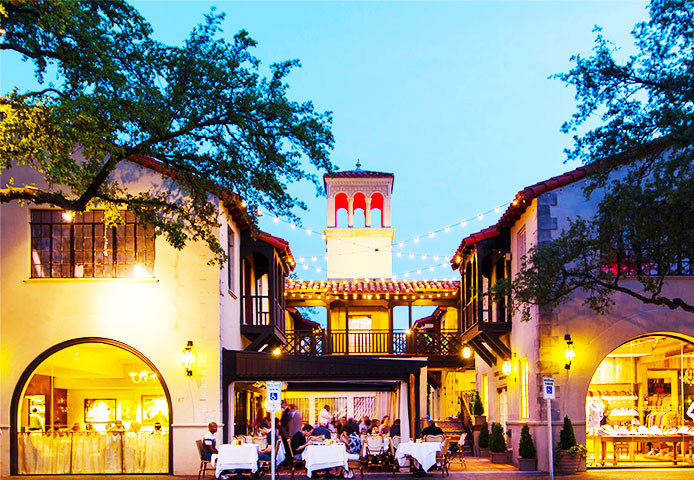 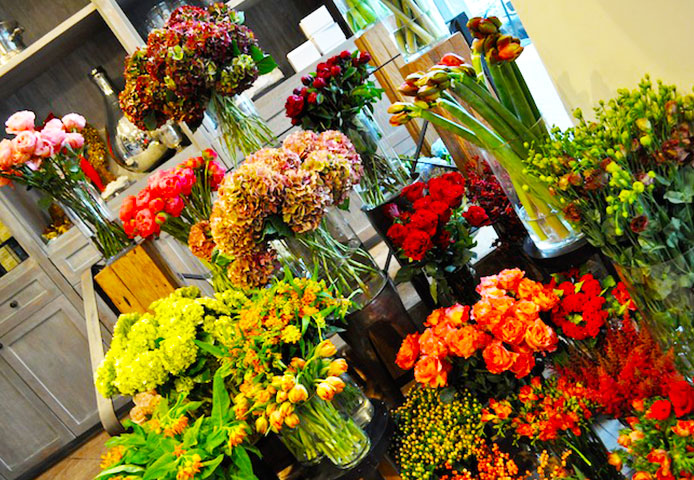 Forty Five Ten– Dallas’ most famous store (okay fine, besides Neiman Marcus) has a complete monopoly on Celine, Dries van Noten, and Givenchy—but since this is Texas, you won’t find the same old stuff that you can find at any other department store. The buyers here hunt for the coolest colors, interesting shapes, and daring exotics on the luxury goods at this store—so even if you just stop by here to peruse, you’ll definitely have some fun.

Dolly Python– When I heard that Dallas native, supermodel, and my personal style icon Erin Wasson’s fave store was Dolly Python, I knew this was the number one place to check out in the city. The vintage store is like nothing else you’ll ever find—Wasson herself claims that she always finds “something kooky and interesting here.” Browse through racks of vintage clothes, art deco prints, and cool bags, but what you should really be on the lookout for is a pair of worn-in vintage cowboy boots. Because you can’t leave the Lone Star state without at least trying a pair of kickers on. 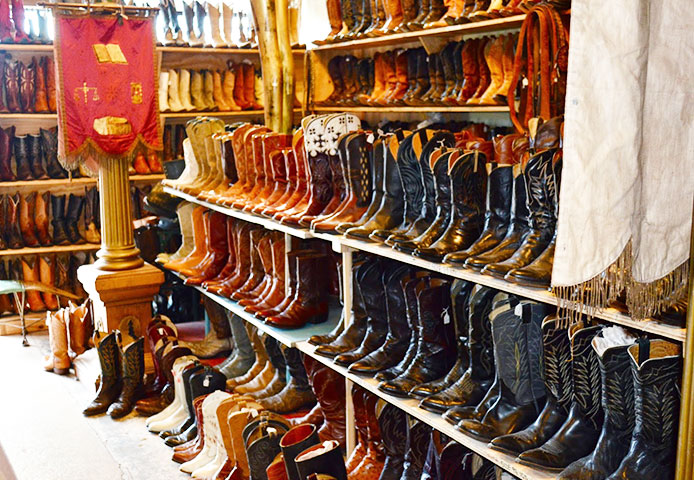 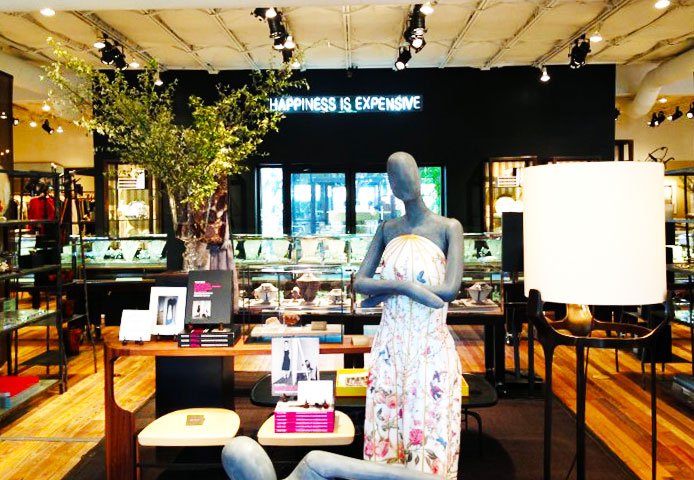 The Katy Trail– Considering the flat landscape that encompasses all of Dallas, it’s hard to find traditional outdoor recreation. However, this public park features dozens of activities—from biking to hiking to skating. Or, just simply meander down the winding road that goes all the way from SMU to the American Airlines Arena. After you’ve finished your exercise, head to the Katy Trail Ice House—because why wouldn’t there be an awesome bar on a hiking trail? This is Texas, after all.

The Dallas Arts District– Dallas is one of the best, if not the best, up-and-coming art hubs. The majority of the arts are located along a 19-block area in downtown Dallas that was created in 2009. The area includes dozens of museums, galleries, performance halls, and more, like The Dallas Museum of Art, The Nasher Sculpture Center, and the Dallas Symphony Orchestra. If this is all too overwhelming, you can schedule an outdoor architecture tour of the district itself.

Dallas Contemporary– The biggest name in the Dallas Art Scene is the DC Museum—and it’s no joke. It’s currently home to the Mario Testino “Alta Moda” exhibit and will later feature pieces from Loris Greaud—which will head to Dallas straight from The Louvre in Paris. 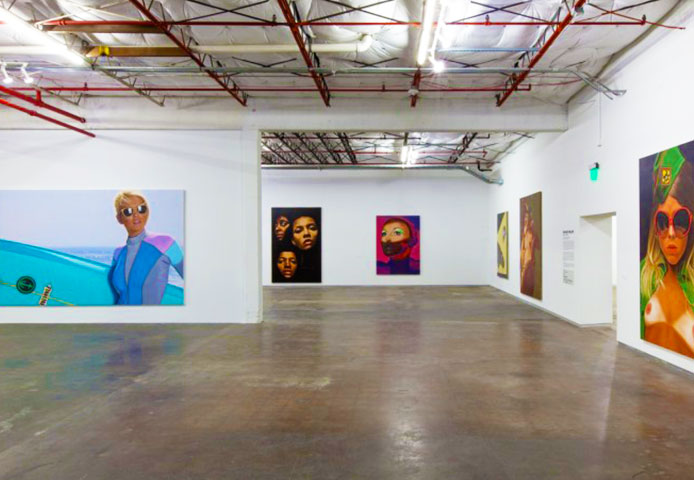 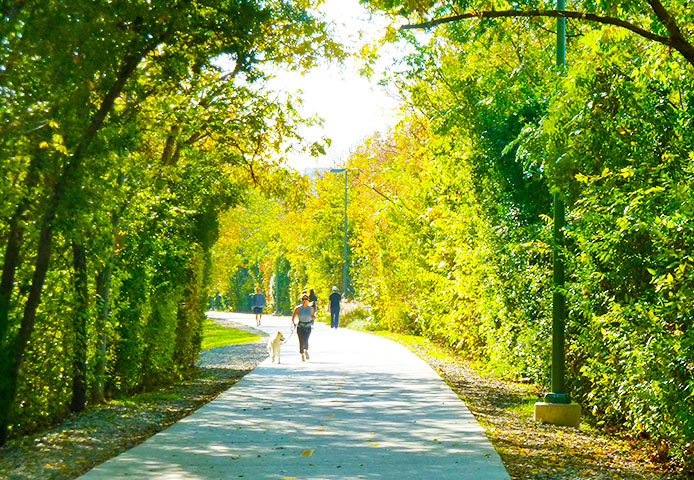