Let’s discuss the simple pleasures in life: holding someone’s hand so seamlessly that you can’t decipher their fingers from your own, fresh baked bread smeared with briny French butter, a smile that says you are endlessly adored, the sizzle and smell of sautéing onions, and finding the perfect book. There’s no pecking order to this short list, but there is a profound satisfaction that comes with losing yourself in a piece of literature. Of throwing on your comfies, laying down on your bed, and cracking open (or turning on) a new book. I always opt for the former – for that tactile experience of bending the pages and feeling the paper, of tangibly holding someone’s words in your hands. (But we know I’m a bit old school when it comes to these things). And then you add to this the fact that it’s now fall. That inherently we want to be wrapped up – not just in sweaters and scarves, but in rich and textured story. Tis the season to be all snuggled up at home, with a cup of peppermint tea, a cable knit throw, and the seasonal soundtrack of autumn leaves swirling outside your window. That’s when you know it’s time to dig into something full-bodied. If book lists were wine lists, this season’s TIG Reading Guide is serving up some big beautiful Cabs – complex and interesting, balanced and satisfying with a memorable finish. Cheers! 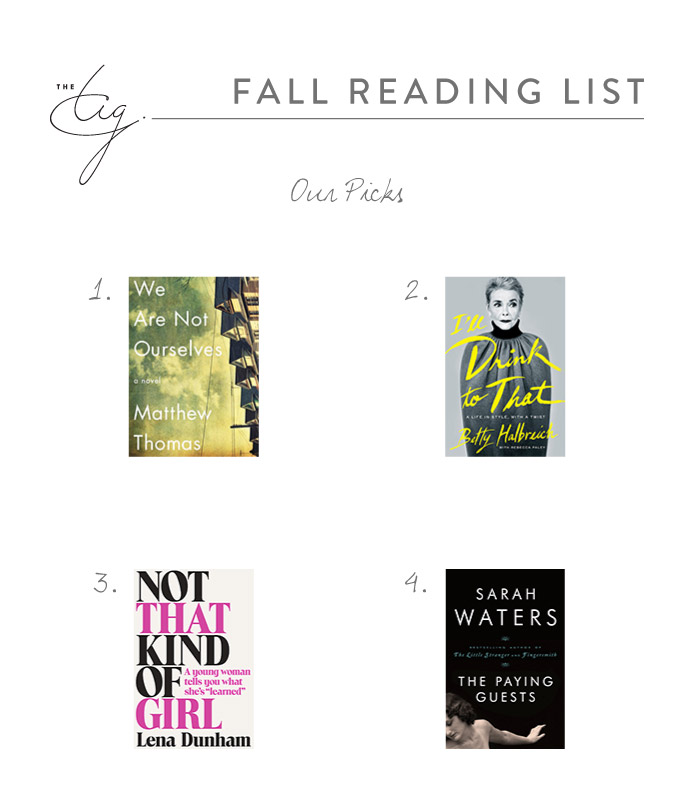 A stunning portrayal of a multi-generational Irish family in New York – this book really captures so much of our quotidian routines and struggles. But beyond that, what will resonate is the story of illness and how the deterioration of someone’s mind and body affects the every aspect of the family unit. Man, do I wish we could say more than that! It’s a masterful debut novel from Thomas and you may remember my gushing about it when I read an advance copy. It’s now avail everywhere, and it’s truly a must read.

Sitting down to read a memoir by the first personal shopper at Bergdorf Goodman, we thought it would be a fun, but fluffy read. But, as they say to never judge a book by its cover (literally), Halbreich’s memoir is deeply thoughtful and personal. It’s not just a story about the behind-the-scenes shopping at Bergdorf’s (although, there is some of that, which makes for some great laugh-out-loud moments), but it’s a book that covers serious topics from marriage to death and all the little slivers in between. When I was in NY recently, I had hoped to make it in time to the book launch party at Bergdorfs but was running late and was gutted to miss it. The fab femmes of HBO’s Girls were there to celebrate this new book, so it’s definitely on the cool kid reading radar.

Speaking of Girls, you’ve probably heard that Lena Dunham was writing a memoir. And like everything Dunham seems to do, from her bare bum bravado on her show to her outspoken and incredibly unaffected POV, this chick has moxy. In her memoir, its her refreshingly honest voice that shines through, leaving us spellbound, yet again. Dunham’s stories are funny, relatable, crass, and effortlessly readable. The book highlights Dunham’s talents as an artist and solidifies our impression of her as a confident & wickedly smart force to be reckoned with as she discusses her time in therapy, summer camp, and her relationship with her family.

If you’re a fan of Downton Abbey (and if you’re not, add that to your binge watch list), you’ll love the new novel by the talented writer Sarah Waters. Set in England in 1922 right after WWI, the story begins with a mother and a daughter who must take in a married couple as their “paying guests” (tenants), much to the chagrin of the previously well-to-do (but no longer) mother-daughter pair. The book may lag a bit at first, but if you’re patient, you’ll be drawn into a page-turning crime thriller and an enrapturing love story that’s one for the ages.