This past december at Art Basel in Miami, I met the lovely Misha Nonoo. And by “met” I mean danced the night away and sipped cocktails with, and by “lovely” I mean – chic, badass, and cut from the cloth of those who don’t take themselves too seriously. The kind of woman you instantly adore. With NYFW right around the corner, I knew I wanted to go and support Misha and see her new collection. Little did I know an orchestra would be the soundtrack to the looks down the line, or that the collection would be as covetable as they come. She outdid herself – and that was just from my bird’s eye view from the front. As with all things chef-y, design-ish, art-esque, and in the world of fashion, I want to understand the thinking behind it – the process, the inspiration, the “why?’ I sent The Tig Team backstage to cover the behind the scenes action, and the nuts and bolts of what makes Misha Nonoo tick. 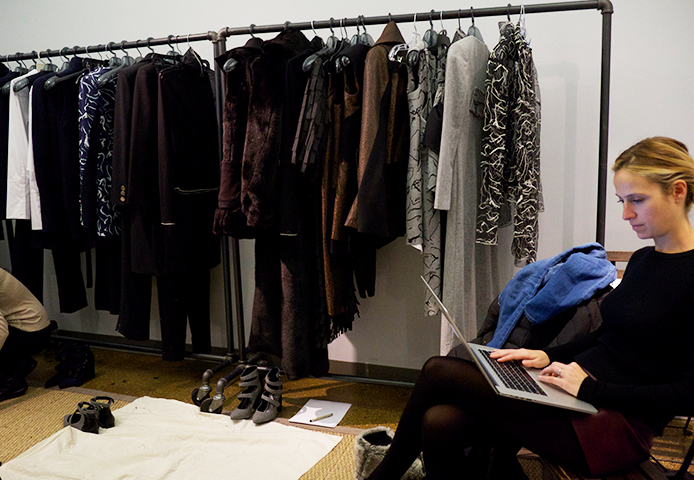 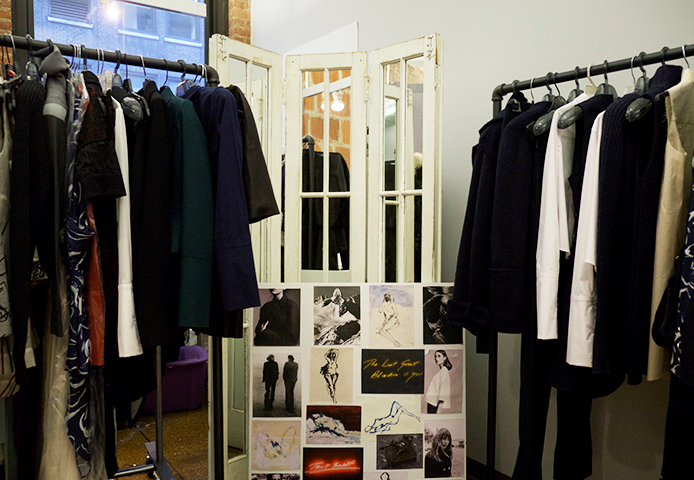 The inspiration for Misha’s Fall/Winter 2015 collection began after Misha went to see the provocative artist Tracey Emin’s exhibition, “The Last Great Adventure is You” at the Frieze Art Fair in London. The exhibit was dedicated to a celebration of who Tracey Emin really is and what her artwork stands for.

With that inspiration, Misha’s Fall/Winter 2015 collection feels like a homecoming of sorts. When Misha first launched her line, she focused on tailoring— a small capsule collection solely featuring jackets and coats perfectly shaped and styled. But after seeing Tracey’s exhibit and how she fully came back to her true art form, Misha felt truly inspired to stop all the noise for a second (and the moments she may have deterred from her guttural instincts) and go back to her roots. This collection has a lot of clarity around who Misha is as a designer—with a penchant for beautiful tailoring and femininity. 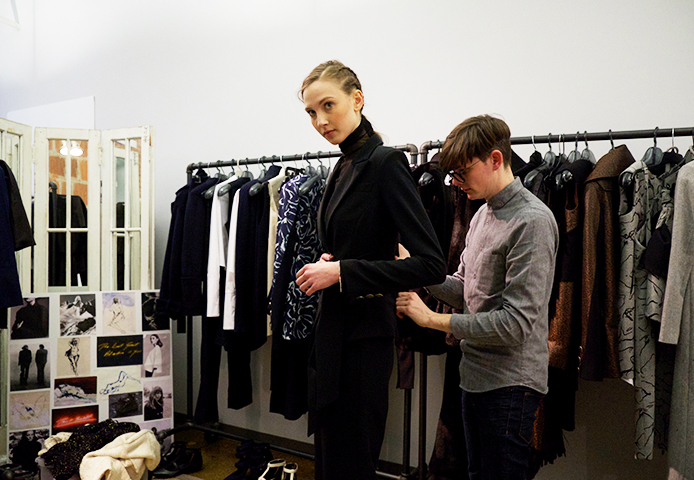 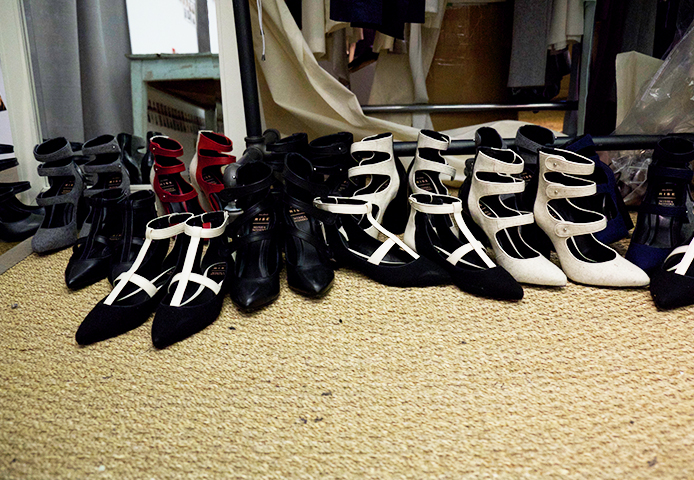 There is a nice tension and marriage of tailored and separate pieces, but there are also many pieces that are softer and more vulnerable. Everything in the collection, which was inspired by the unfinished feel of Tracey Emin’s copper sculptures, have almost an unfinished feeling to them. There’s a focus on the dichotomy of structured tailoring paired with sheer tulles, soft crepes, and charmeuse to evoke a sense of sensuality without compromising a woman’s inner strength and power. 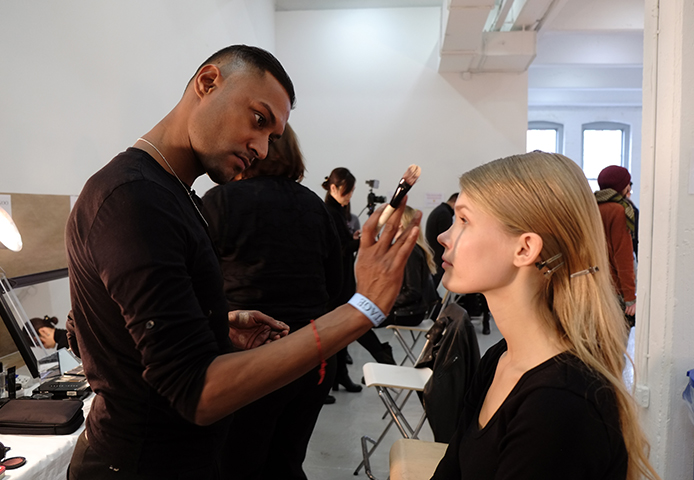 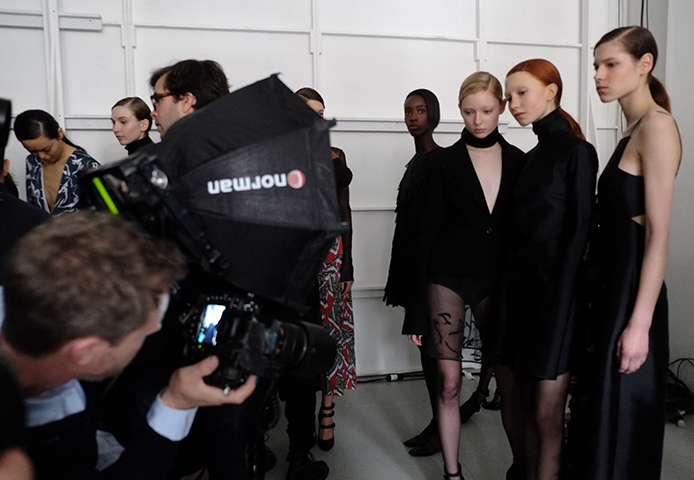 On Valentine’s Day, models, Bobbi Brown make-up artists, Tresseme hair gurus and a plethora of fashionable people gathered on the 3rd floor of Center 548—which normally serves as an art gallery (apropos for Misha’s show) in the afternoon prior to the start of the show. For the models’ hair, Misha wanted to focus on personal style and a sense of ease on and off the runway. So, hair stylists blow dried the models’ hair straight, then the models styled their own hair in a low ponytail—something that’s probably never been done before a runway show! 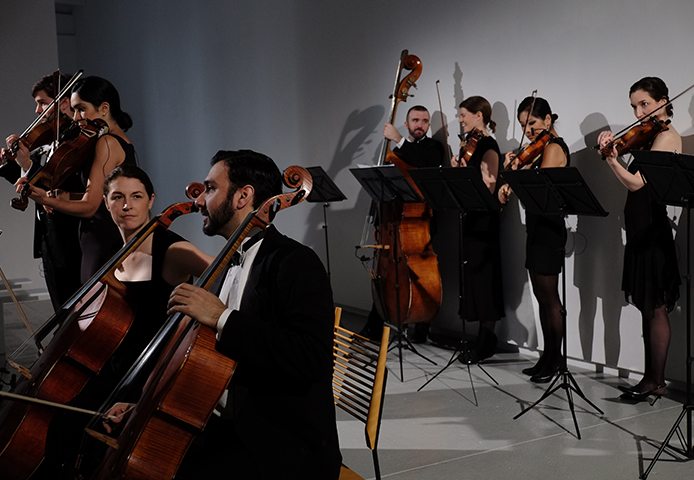 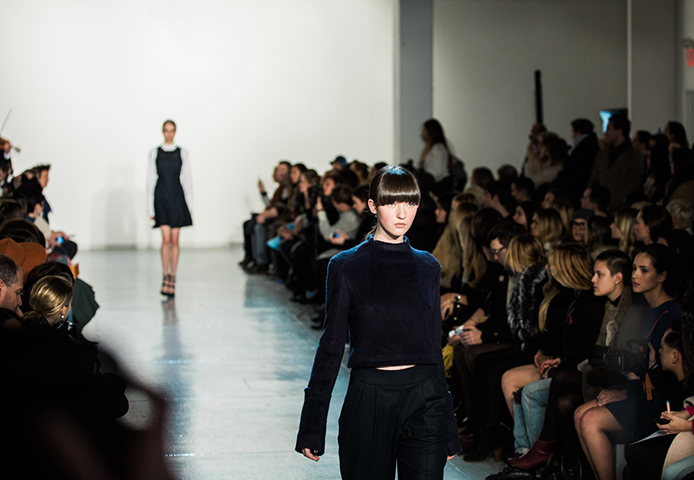 Since this show really felt like a homecoming for Misha, the music was incredibly important to accompany the show. After seeing the French film, Girlhood, which was all about female empowerment, Misha felt inspired by the orchestral soundtrack to the film. Misha featured the live orchestra, Decoda, which is an affiliate ensemble of Carnegie Hall, founded on the belief that a group of young artists can use music to help people make deeper connections to art and to one another. This element was absolutely stunning – and calm in the fray of fashion week madness.

Between the models in their strong-meets-soft silhouettes, easy undone hair and fresh makeup, walking down the runway in the contemporary, bare room to the soundtrack of Decoda, the feeling not just artistic – it was magical —something Misha Nonoo should be proud to have created.

Images via: The Tig, Ania B