Each year for International Women’s Day we share musings from our EIC or other quotes to stimulate and inspire. This year we invite you to read a piece written by our very own MM for TIME Magazine. Today and every day, we remind you to “be the change you wish to see in the world.” Let’s start now, friend. Happy IWD!

PERIODS, POTENTIAL, AND THE PATH TO EDUCATION

Imagine a world where the female leaders we revere never achieved their full potential because they dropped out of school at the age of thirteen. In the Western world this is challenging to fathom, but for millions of young women globally, this remains their harsh reality for a staggering reason. From sub-Saharan Africa to India, Iran, and several other countries, the stigma surrounding menstruation and lack of access to proper sanitation directly inhibit young women from pursuing an education.

Based on societal ignominy in the developing world, shame surrounding menstruation and its direct barrier to girls education remains a hushed conversation. As a result, both household dialogue and policy making discussions often leave Menstrual Hygiene Management (MHM) off the table. Former First Lady Michelle Obama spoke directly about this subject at the World Bank in April 2016, and various NGOs actively seek out policy reform and programming to address this concern, yet the topic remains neglected.

I traveled to Delhi and Mumbai this January with World Vision to meet girls and women directly impacted by the stigmatization of menstrual health and to learn how it hinders girls’ education. One hundred and thirteen million adolescent girls between the ages of 12-14 in India alone are at risk of dropping out of school because of the stigma surrounding menstrual health. During my time in the field, many girls shared that they feel embarrassed to go to school during their periods. Ill equipped with rags instead of pads, unable to participate in sports, and without bathrooms available to care for themselves, they often opt to drop out of school entirely. Furthermore, with minimal dialogue about menstrual health hygiene either at school or home due to the taboo nature of the subject, many girls believe their bodies are purging evil spirits, or that they are injured once a month; this is a shame-filled reality they quietly endure. All of these factors perpetuate the cycle of poverty and stunt a young girl’s dream for a more prolific future.

The Indian government initiated a campaign in 2014 called “Save the Girl Child, Educate the Girl Child,” reinforcing the value of a girl’s life and her education. And while this initiative steers India closer to the Sustainable Development Goals, (specifically universal education & gender equality), the fact remains that only fifty percent of secondary schools in India have toilets, leaving roughly fifty percent of the population deterred from attending. If MHM were part of the conversation surrounding policy change, just as access to clean water and sanitation, it would push the conversation (and actualization of it) significantly further.

When a girl misses school because of her period, cumulatively that puts her behind her male classmates by 145 days. And that’s the mitigated setback if she opts to stay in school, which most do not. The latter elect to return home, increasing their subjection to dangerous work, susceptibility to being victims of violence, and most commonly, being conditioned for early childhood marriage. As a female in India, the challenge of survival begins at birth, first overcoming female feticide, then being victim to malnourishment, potential abuse, and lack of access to proper sanitation facilities. Why, if she is able to overcome all of these challenges and finally get to school, should her education and potential to succeed be sacrificed because of shame surrounding her period?

To remedy this problem, young girls need MHM, access to toilets, and at a most basic level, sanitary pads. Twenty-three percent of girls in India drop out of school because these factors are not at play. During my time in the slum communities outside of Mumbai, I shadowed women who are part of a microfinance system where they manufacture sanitary napkins and sell them within the community. The namesake of the organization, Myna Mahila Foundation, refers to a chatty bird (“myna”) and “mahila,” meaning woman. The name echoes the undercurrent of this issue: we need to speak about it, to be “chatty” about it. Ninety-seven percent of the employees of Myna Mahila live and work within the slums, creating a system which, as Nobel Peace prize nominee Dr. Jockin Arputham shared with me, is the key to breaking the cycle of poverty and allowing access to education. In addition, the women’s work opens the dialogue of menstrual hygiene in their homes, liberating them from silent suffering, and equipping their daughters to attend school.

Beyond India, in communities all over the globe, young girls’ potential is being squandered because we are too shy to talk about the most natural thing in the world. To that I say: we need to push the conversation, mobilize policy making surrounding menstrual health initiatives, support organizations who foster girls’ education from the ground up, and within our own homes, we need to rise above our puritanical bashfulness when it comes to talking about menstruation.

Wasted opportunity is unacceptable with stakes this high. To break the cycle of poverty, and to achieve economic growth and sustainability in developing countries, young women need access to education. When we empower girls hungry for education, we cultivate women who are emboldened to effect change within their communities and globally. If that is our dream for them, then the promise of it must begin with us. Period.

This piece was originally written for TIME Magazine, March 8th, 2017 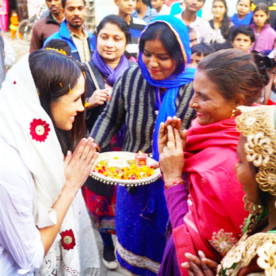 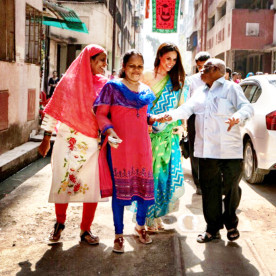 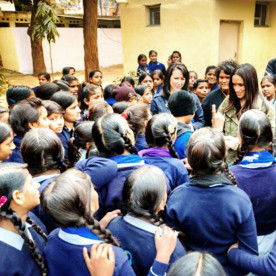 We need to push the conversation, mobilize policy making surrounding menstrual health initiatives, support organizations who foster girls’ education from the ground up, and…we need to rise above our puritanical bashfulness when it comes to talking about menstruation. Because at the end of the day, this isn’t about periods – it’s about potential. Wasted potential.