A few years ago, my friend, Genevieve, sent me a card: “Be the change you wish to see in the world.” A Gandhi quote. A simple “hey friend” correspondence via my beloved snail mail – pen to paper, stamped, sealed, and sent with love. But those ten words – that beautiful quote – was more than a friendly check-in; it was a call to action. Be the change.

When I was asked to be a counsellor at One Young World last month in Dublin, my response was a resounding “yes.” OYW invites young adults from all over the world who are actively working to transform the socio-political landscape by being the greater good. They are delegates who are speaking out against human rights violations, environmental crises, gender equality issues, discrimination & injustice. They are the change. And One Young World gives them the opportunity to participate in panels with world leaders & influencers including: former UN Secretary General Kofi Annan, Nobel Laureate Professor Muhammad Yunus, CEOs of Barclays, Unilever & Wikipedia, Mark Pollock, Boris Becker, Dame Ellen MacArthur, James Chau, Bob Geldof, and several others that would make your jaw drop. And by some fortune, I was asked to be there as well.

I was assigned to one specific delegate, Luwam Estifanos, a young woman from the country of Eritrea, described as the North Korea of Africa – where she was a slave from the age of 16 until she ran to her freedom across the border just a few years ago; she now lives in Norway, where she works with a grass roots organization to end slavery in Eritrea, to free her friends who remain enslaved, and to bring attention on a global level to the injustice happening in her homeland.

Truth be told, most people have never heard of Eritrea, much less of its status as an open prison. Most people turn on the morning news and only see coverage of celebrity weddings and weather forecasts, of videos that have gone viral, and the best time to buy your holiday flights. Much of that is why I felt equal parts inspired and humbled to be seated next to the bravest person I have ever known. I encourage you to listen to Luwam’s speech, to find something within yourself that is a call to action, and to be the change you wish to see in the world. 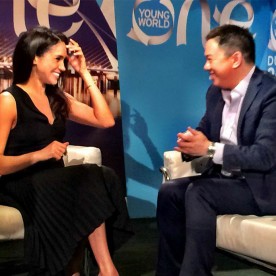 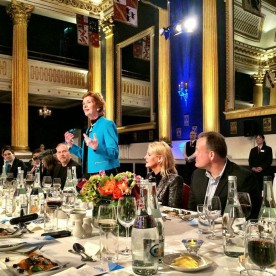 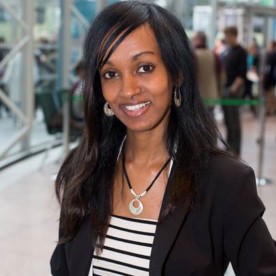 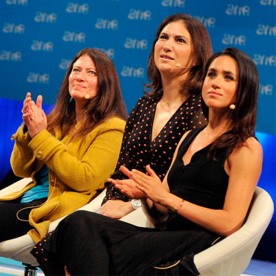 Meghanpedia: There’s a video to this post. We’ll upload it when we come across it.

Find something within yourself that is a call to action…to be the change you wish to see in the world.